Watch the MAN vs EGA highlights 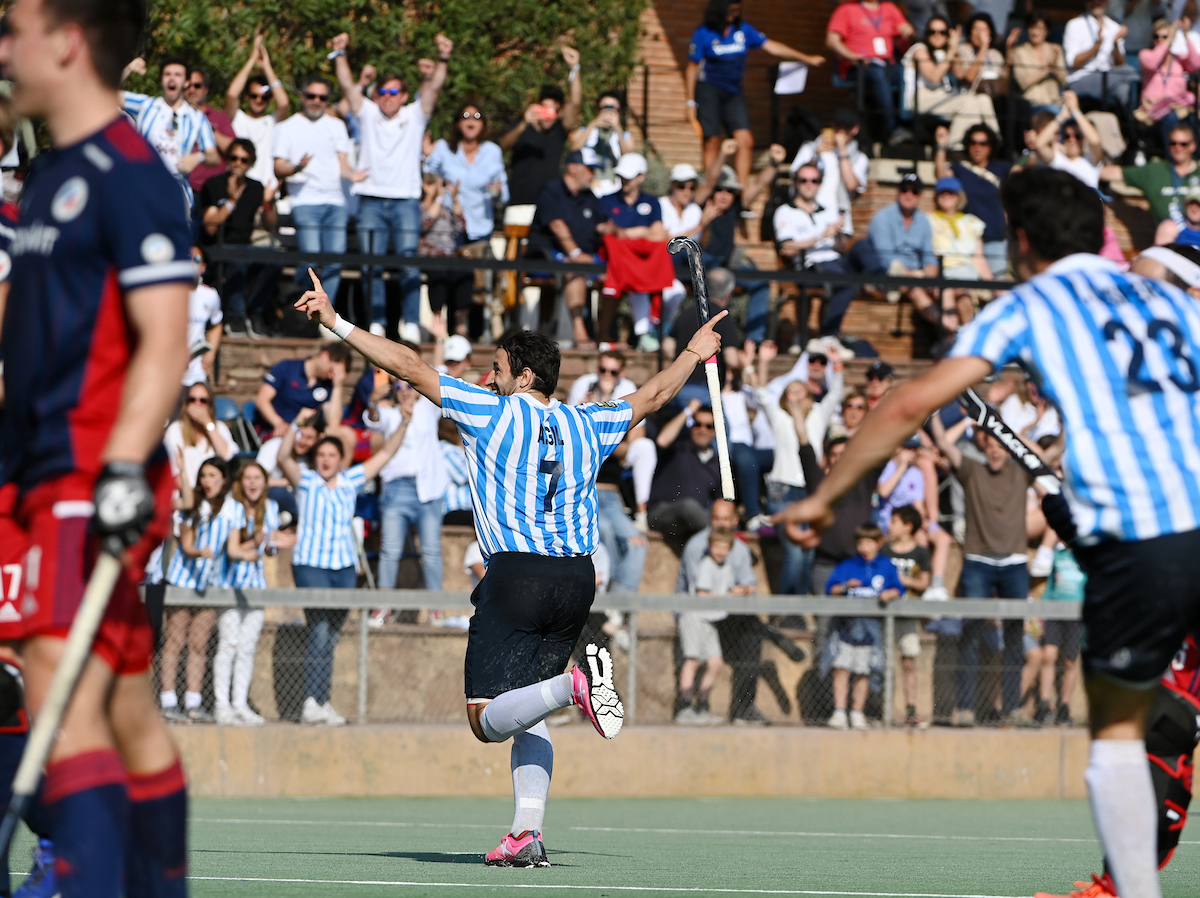 Club Egara delighted their home fans as they landed the men’s ABN AMRO EHL Cup at Pla del Bon Aire with a thrilling 4-3 win over Mannheimer HC in the final.

It was a rollercoaster from the beginning with Marc Recasens opening the scoring just four minutes in from a corner.

Mannheim countered with three corners in quick succession and, in a lesson for the hosts, you shouldn’t give Peillat three chances in 3 minutes as he slotted that one home to even the scoreline to 1-1.

Egara restored their lead in the 8th minute, again from a pc setpiece. A rebound from a save by Mannheimer’s Lukas Stumpf as Xavier Aguilar pounced on the ball and slotted home, with a roar from the home support.

In the dying minutes of the quarter, darting runs from Egara’s Marti Soler were promptly shut down by the Mannheimer defence.

Mannheim came back after the short break stronger but, once again, the hosts’ work rate to keep them from scoring opportunities was exceptional, with an all hands on deck approach, not giving the Germans an inch.

Into the second half, Club Egara forced a penalty corner and extended their lead 1-3, a well-rehearsed routine as the ball was sent in with precision to the near castle and Recasens added to his tally for the day.

As the game progressed there was an impressive work rate from both teams, but Egara seemed to be the ones with just that bit more energy to get first to any potential turnovers.

A classy Mannheim still waited patiently for their opportunities and in the 42nd minute, it took a great save from Egara’s keeper to keep the score 1-3. Moments later, MHC pressed again, a beautifully taken strike from play as Teo Hinrichs narrowed the score to 2-3.

And they equalised early in the fourth quarter as the GK appeared to be unsighted as Raphael Hartkopf scored on the run, a momentary lack of concentration from the stalwart Egara defence so far in the game.

Mannheim seemed to have found new energy as they are now the ones who seem to be controlling the ball better.

A patient Peillet managed his back four, transitioning the ball from left to right, just waiting for the moment to attack.

With 3 ½ minutes on the clock, their patience paid off as they earned a corner where some brave running from Egara as the first runner went down the barrel of a Peillat strike which was deemed to be dangerous and a free hit to the hosts.

Egara went on the attack again and a rare error from the German defence earned them a corner and then a re-award. This time, they made no mistakes and the strike from Recasens put the hosts in touching distance of the win, his sixth goal in three games.

With just 23 seconds on the clock, Mannheim again earned a pc, the last roll of the dice of the game. The on-target strike was bravely saved and Egara, mindful that the game was not quite done, focused only on not fouling and getting the ball safely away.

It was enough as the final whistle went the home crowd went wild.

Mannheimer’s Head Coach, Andreu Enrich felt that the difference between the clubs was “the energy that Egara brought to the game, and how they responded to the amazing home support.”

On preparing his team for this battle he added: “I said to my guys that they are going to bring a lot of energy, and play with their heart. Our preparation was focused on doing it in a German way, so we focused on that and controlling the possession.

“But in the end, they did an amazing job, especially against our penalty corners!”

Winning captain Josep Lluis Novell (Pep) said the was feeling “Amazing, especially in front of this crowd here. To be honest, we felt that we started the game with a 1-0 lead!”